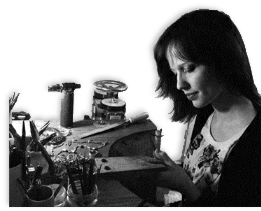 Emily Menary designs and makes jewellery in precious metals from her workshop in Rugby, Warwickshire.

She trained at Birmingham’s famous School of Jewellery before launching Emily Richard Jewellery in 2008. Her work is influenced by geometric patterns and shapes, often using simple elements to make up more intricate, often three-dimensional patterns. Her two current collections, Torus and Phoenix, can be viewed online here.

To find out where you can see Emily’s jewellery in person, click on Where To Buy.